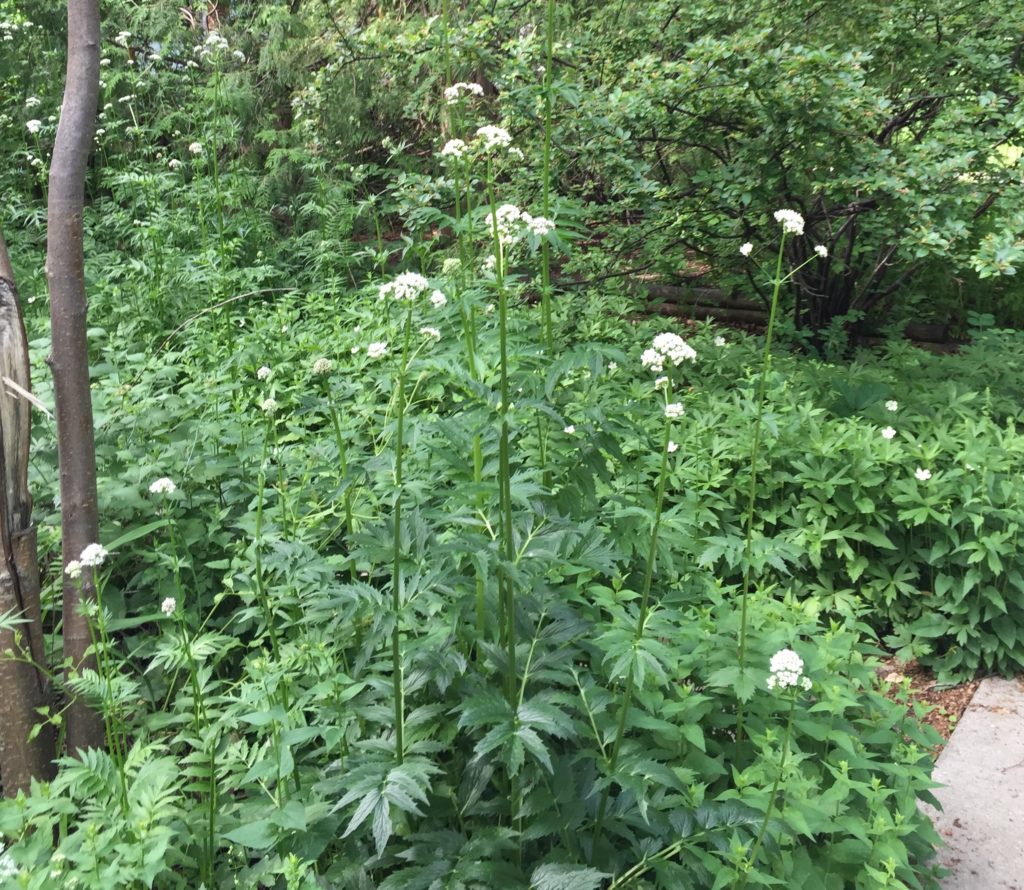 Introduction
Valeriana officinalis (common names: garden heliotrope, garden valerian, common valerian, greek valerian) is classified as an alien species in North America, having been introduced from outside its normal distribution. It is a plant native to parts of Europe and Asia. The Food and Agriculture Organization of the United Nations has defined alien species as those whose introduction and/or spread threatens biological diversity, and whose establishment and spread will modify ecosystems, habitats and affect native species. Invasive species grow and spread quickly because they are able to adapt to a variety of growing conditions and lack the usual predators and diseases that control a population. A native species, on the other hand, is one that occurred in the region before human settlement introduced non-natives. Local native species are referred to as “indigenous”.
Valeriana officinalis is an herbaceous perennial that grows from a small rhizome, has fibrous roots and can reach a height of between 18” to 48”. Since being introduced, it has been grown as a garden perennial, desirable for its statuesque form, attractive flowers and intoxicating perfume. But, its primary reason for cultivation has been for medicinal home-use, later for its commercial value as a medicinal herb for the treatment of conditions such as insomnia, a cure for croup, convulsions and bruises as well as being thought to ward off the plague. Most of the claims have been disputed scientifically, but it is still sold today mainly for relief of nervous tension and as a sleep aid. Its prolific growth by the herbal medicine industry has given it the opportunity to escape into the natural landscape where it spreads quickly and takes very little time to show up in vast numbers, displacing the natural balance.

My Encounter with the Devil
About seven years ago, Valeriana officinalis introduced itself to me. It appeared as a single plant in one of my garden beds that spring. I have what would be termed a cottage garden, informal in design, made up of mainly indigenous and introduced materials, densely planted. It is my interpretation of a prairie landscape. When I spotted this particular newcomer, it intrigued me because it was unfamiliar to me. The foliage immediately caught my eye – dark green, opposite leaves, mostly sessile with the basal ones petiolate, pinnately divided into approximately twenty-one lanceolate segments with mostly dentate margins (some entire). I was intrigued to watch it grow. It grew tall on pubescent stems. I have a fondness for tall plants and so I took a liking to it. It bloomed in late July with fragrant white to pinkish umbel-like inflorescences. Not only were the flowers beautiful in their many-clustered paniculate form, but they exuded the most exotic perfume. I was thrilled and happy to let it take up residence in my garden. I felt I had something unique. I could now identify it as the perennial Valeriana officinalis. I enjoyed it that year and looked forward to its re-emergence the next year.
It did, in fact, return the next year, and I was delighted to see that it had multiplied. There were now four plants in the vicinity of the first sighting. They were a beautiful addition to the garden that summer. When it showed up the third year, I was taken aback and not so sure my invitation to have it take up residence in my yard was a wise decision. The lovely valerian had multiplied to a point that gave me grave concern. It appeared I had an issue with control. New valerian plants now appeared in many locations, mostly where I did not want them. They not only appeared in my flowerbeds but in my lawn and boulevard, in my neighbours’ lawns and flowerbeds, on the boulevard adjacent to my yard and in lawns and the boulevard across the street. There were now hundreds of valerian plants. I tried various methods to remove them. I attempted to pull them out, dig them out and gave some a dose of Glyphosate (Roundup). I soon came to the realization that eradication was going to be very difficult if not impossible. Pulling would leave a portion of root and the plant was soon back. Leaving even a slight piece of root when digging, allowed it to regenerate in a relatively short time. In reading reports on valerian, I was shocked to see that deadheading valerian is said to increase the root growth. Glyphosate seemed to work in some cases but because my garden is densely packed, I could only spray a small amount each time and often the plant recovered. Two or three applications of Glyphosate were necessary to ensure its demise. I tore off any flower head that developed. With all my attempts to eradicate it, it still returns each year in the same high numbers. I often walk around with a container of Glyphosate in my hand, daring it to show itself. It is impossible to keep track of all the valerian plants in my yard. My neighbours are not conscientious gardeners, with the result that I have to monitor the sightings in other yards and public spaces. I don’t allow any to flower in the hope of keeping the numbers no more than constant. This means hundreds are returning year after year. 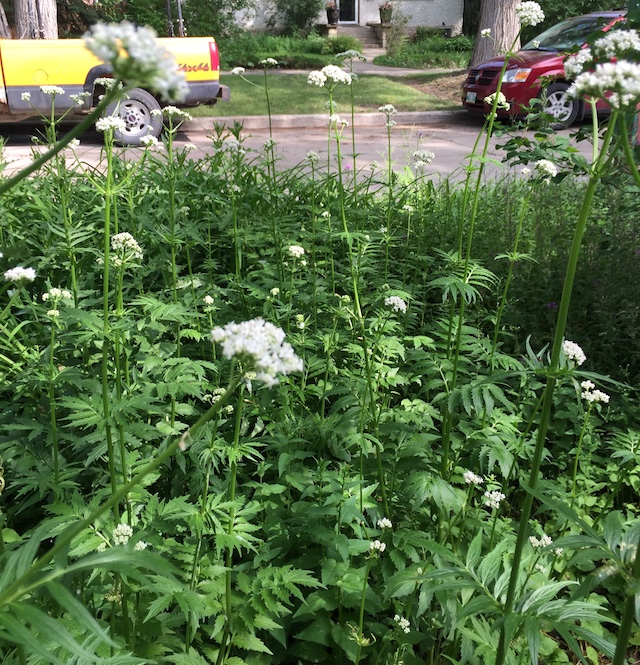 Showing up in unexpected locations
In the last three years I have discovered swaths of valerian growing in home gardens in various locations in my neighbourhood. The numbers continue to rise as it appears that many of my neighbours are content to let it create a statement in their yards. And, it does just that; particularly once the numbers reach a certain point. It would appear to be firmly established in my neighbourhood. In one yard I visited a week ago, even I was taken aback by the numbers of plants I could see. This neighbour had allowed valerian to remain for about three years, and I could tell that they now knew what they were up against. They had mowed the valerian in a futile effort to control the numbers, but there were hundreds if not thousands sprouting up. This is a strong take-away message about knowing what you are growing. I have suggested to a few of the neighbours who have allowed it to grow in their yards, that it is unwise to allow valerian a place in their yards, all of whom have been ambivalent to my warnings. One neighbour has a “valerian themed” backyard. There is virtually nothing other than valerian growing on all four sides of this back yard, with several plants growing in the front yard beds. I pick the heads off the front yard plants as I walk by. I have seen another neighbour attempting to reduce, not eliminate, the numbers he has.

My Biggest Concern Regarding Valeriana Officinalis
My biggest fear was realized last fall when I found a single valerian plant flowering in a natural wooded area on the riverbank near the St. Vital Bridge. No longer was it in someone’s yard, but it made its way into a natural landscape. I quickly dispatched the plant, hoping that it had not had a chance to dispense seeds. I have been diligent in monitoring the riverbank site this spring. So far, there is no sign of valerian along the bank where I found the plant a year ago. I believe this is in part due to the high river water we experienced this year. The bank where I had discovered the valerian was flooded for a period of time in the spring, and a thick layer of clay was deposited on the bank when the water receded. It has dried into a hard mass about two inches thick and broken into sections. Growth is sparse in this location as most plants cannot poke through the clay. Some grasses have managed to work their way through the clay, but there is no sign of valerian to date.

What’s Next?
This dreadful experience has prompted me to do extensive research into valerian, with my findings leading me to realize that it is not just an annoyance, it is a serious threat to the natural landscape around Winnipeg. Manitoba does not have an Invasive Species Council anymore. Manitoba Agriculture has been appointed to deal with invasives in this province, but their involvement is very limited and not current. For example, Manitoba Agriculture has a fact sheet on Valeriana officinalis which speaks only of valerian as a medicinal herb, describing it as a commercial crop for the health care industry, with no caution to guard against its escape and no mention of its potential to become invasive. Anyone reading this fact sheet might perceive it as an attractive flowering plant and might well be tempted to go out and purchase valerian seeds for their garden. Alarmingly, that is a possibility. I recently noticed that Amazon had an advertisement for the sale of Valeriana officinalis seeds: 1,000 seeds for CDN $10.86!
From the documentations I have read in my research, valerian appears to be a particular concern in the eastern half of the US and Canada. I checked the websites of the Invasive Species Councils of BC, Alberta and Saskatchewan. British Columbia, Alberta and Saskatchewan each have active invasive species documentation but no indication of valerian as a problem in those provinces. In Eastern Canada, New Brunswick has declared valerian a species of concern. I corresponded with Jennifer O’Donnell of BIONB and was told that it is being monitored in New Brunswick. Being aware that it is impossible to stop the spread of species around the world, New Brunswick’s plan of attack involves slowing down invasive species via prevention, detection and management. Prince Edward Island lists valerian as a Priority 1 invasive species. Nova Scotia lists valerian as a threat to open forests and marshy forests. The Ontario Invasive Plant Council has no mention of Valeriana officinalis in their literature.
I contacted the Canadian Council on Invasive Species and communicated with Kellie Sherman. She said their agency is aware of the potential of valerian to become invasive, but is not recommending action be taken at this time. She did, however, send me information from Wisconsin where valerian has become out-of-control and has been banned. She also told me that Connecticut has listed valerian as a species to be watched. To date, it appears Wisconsin is the only US state to out-right restrict the growth of valerian, although twenty-two other US states have listed it as a species of concern. Wisconsin has produced vast scientific and observational research related to valerian. This extremely extensive documentation and reporting by Wisconsin is well worth reading (see links at the end of the article).

Why Declare Valeriana officinalis an Invasive Plant in Manitoba?
• Early emergence, plant size, vigorous growth habit and the ability to self-seed in vast numbers gives valerian a competitive advantage over native species as well as the ability to displace them
• It is tolerant of wet and dry conditions
• It can thrive in a variety of conditions, able to invade naturalized areas such as forests, grasslands, wetlands, marshes, woodland swamps, and stream edges.
• Valerian can lower biodiversity so greatly that it creates a monoculture as has been the case in Wisconsin.

Wisconsin’s Advice
Wisconsin’s experience has concluded that eradication of invasive species is most likely to succeed when the established population is small, making the effort to detect very low numbers of a target species worthwhile.

Can the MMGA Get Involved?
I am hoping that through the MMGA we can raise awareness of the issue of invasive plants and that there will be opportunities for the MMGA to become more involved in education and notifications of potentially invasive plant species. We need to share our knowledge about invasive plants and to be able to recommend what to grow instead. 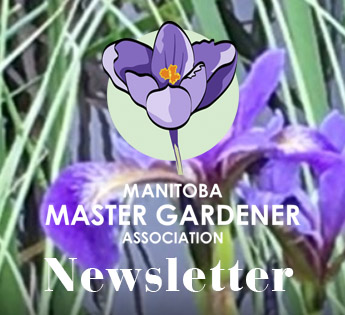