A Splash of the Tropics in the Garden – About Overwintering Tropicals 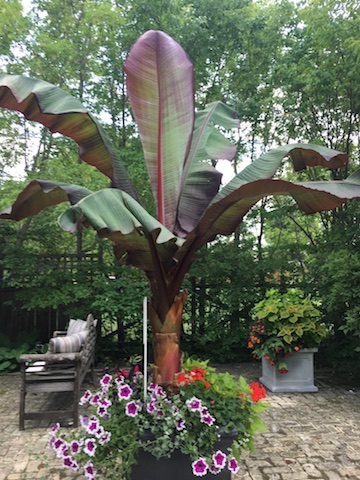 I started growing canna lilies (Cannaceae), which is not a true lily, 4 years ago when a fellow gardener gave me a rhizome of a Red King Humbert canna lily. I planted the rhizome horizontally with its eyes facing up in 6 inches of potting soil in early March. The 8 inch pot was placed in a sunny location by a south window and it was watered, keeping the soil moist. In April I was pleased to see two healthy leaves poking out of the soil.

The canna was kept in a heated sunroom (minimum temperature 60 Fahrenheit or 15 Celsius) that had plenty of bright light. Cannas like 6-8 hours of sunlight. It was watered with a weak mix of all-purpose fertilizer 15-30-15 weekly.

In mid-May I started to harden off the Canna by taking it outside exposing it to the sun and shade daily. When the danger of frost passed, it was planted in the centre of a large south-facing planter. Cannas can tolerate heat as long as you keep them well watered.

The canna continued to grow sending out more leaves and several blooms from July to September. It grew 4 feet high. Cannas need to be watered generously and fertilized bi-weekly to promote blooms during the growing season. Pests such as slugs, leatherjackets and cutworms can eat the rhizome. The name canna originates from the Latin word for cane or reed. They can also be grown in ponds, a feature I’ll have to contemplate in the future. 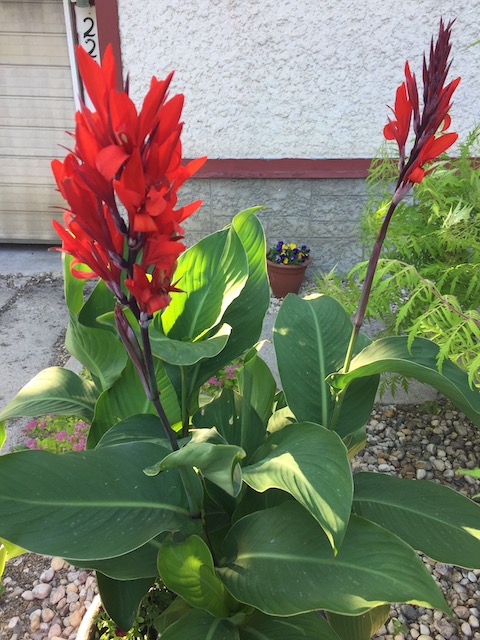 In fall, when the first frost blackened the leaves, I carefully dug up the rhizome with the foliage attached. I dried it for a week and then removed the leaves and roots from the rhizome.

I was surprised how long the rhizome grew and just how challenging it was to remove it. It got divided, some accidentally and some by cutting, leaving at least 3-5 eyes on each divided piece. The divisions were dried again and then placed in a single layer in a container filled with peat moss. The container was stored in the basement on a north wall. Ideal temperature is 40-45F or 4-7C. My basement storage area is around 60F or 15C and the rhizomes survived. Periodically, the peat moss was misted lightly to provide a bit of moisture so the rhizomes would not dry out.

In mid-March I planted 15 rhizomes in 8-10 inch pots and followed the same process noted above. All 15 cannas grew – a testament to their hardiness. In year three it increased to 23 cannas and year four, 31 cannas.

Because these plants require minimum care and reward you with such beautiful blooms and unique foliage, and I had too many red, I grew some yellow, orange and variegated leaf varieties. Foliage colour varies from green, maroon, bronze to variegated. 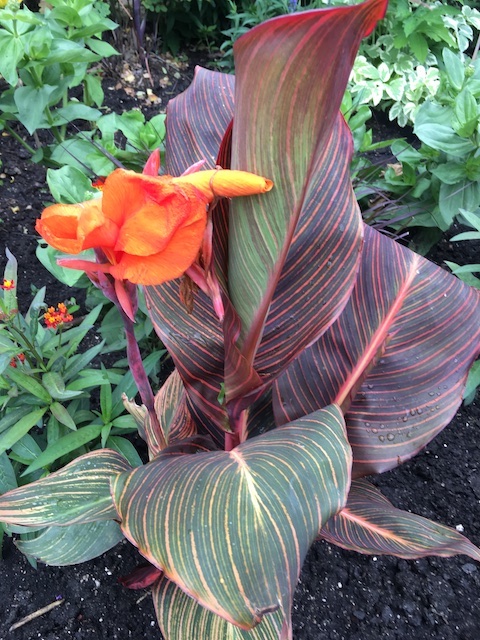 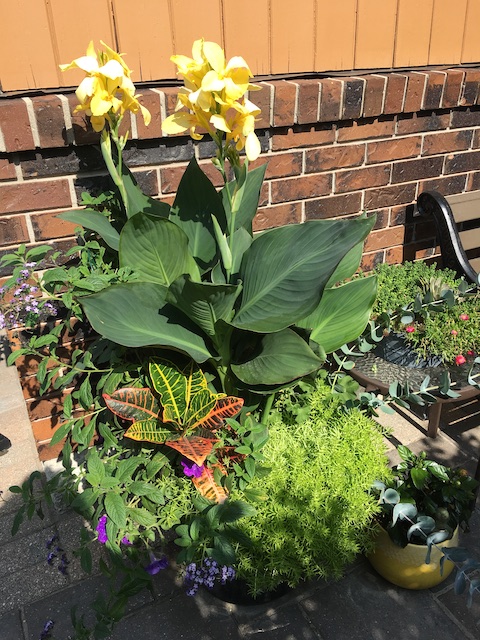 Are you wondering what I do with all these Cannas? I keep  several for my containers because they are such a great thriller plant. The remainder is given to family, friends and neighbours who enjoy them as much as I do. This is a bonus as I get to see the Cannas when I visit and pass by during my travels. It also generates many interesting gardening conversations with the recipients. 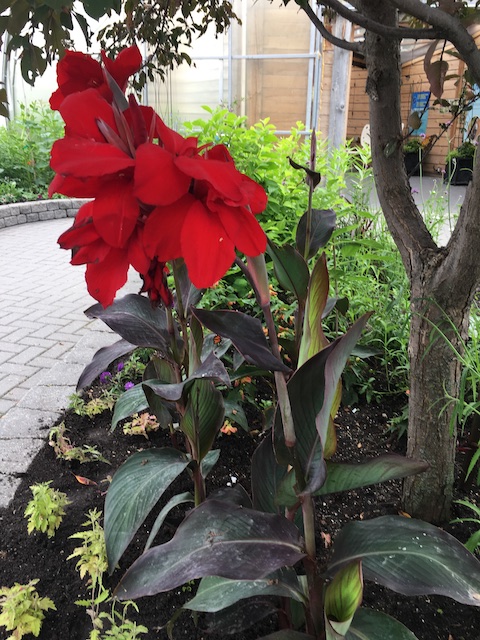 Another tropical I’m experiencing with is Elephant Ear’s (Alocasia) which I planted in a front yard container. I was advised by a much more experienced gardener I could plant the 12 inch pot to contain its invasiveness in the planter. I thought this was a great idea as I could remove it to over winter, thereby protecting my investment.

I felt the planter would be sheltered enough from the westerly winds by the newly planted 6 foot Colorado spruce tree, but it wasn’t. The winds whipped around and shredded three large leaves that had to be removed. Additionally, the spruce tree didn’t provide enough filtered sun so, off with another two of the 2-foot leaves that the sun scorched.  The once grand dome-shaped plant is now a smaller, let’s say, well-contained plant that is looking good with the filler and spiller plants it’s living with. 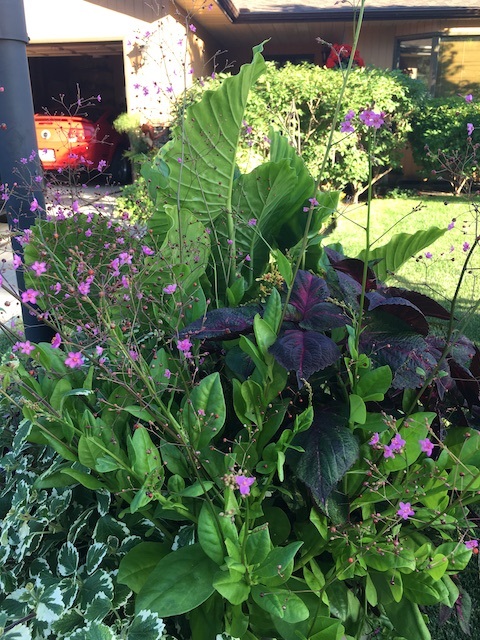 During the July MMGA garden tour gardeners were going ape over the banana plants (Musaceae) at John Tinkler’s Garden.

Tinkler said these plants are easy to grow. In the fall Tinkler simply cuts the leaves down just above the stem, removes the root  from the pot, clears the roots of soil to avoid rot and mould, puts them in large black plastic bags and brings them inside to overwinter in his basement. In the spring, when the risk of frost passes, they are brought out and repotted with the beautiful plant as shown in the photo. With smaller plants one can simply cut the leaves down and overwinter the pot in the basement.

There are around 70 species of Banana plants (Musaceae). Though they grow as high as a tree they are not woody and their apparent ‘stem’ is made up of the bases of huge leaf stacks. Thus they are gigantic herbs.

This plant truly caught the attention of the garden visitors. I may have to make a trip to a market garden to purchase one in the hope of having it survive for a few growing seasons. To do this, I’ll definitely have to make room on the canna farm for this beauty.

← The Attraction of Peonies
Preparing your Garden for Winter Birds →

Aug
22
Mon
12:00 pm Seed Saving @ Zoom online
Seed Saving @ Zoom online
Aug 22 @ 12:00 pm – 1:00 pm
Join Kelly Leask from Prairie Originals to learn about Manitoba’s native prairie plants and the role of gardens and gardeners in their conservation. The conversation will have a focus on seed saving with tips on harvesting, cleaning and …
END_OF_DOCUMENT_TOKEN_TO_BE_REPLACED
Sep
13
Tue
9:00 am Gardens of Normandy and Loire Va... @ Garden Tour
Gardens of Normandy and Loire Va... @ Garden Tour
Sep 13 @ 9:00 am – Sep 25 @ 10:00 am
Explore the gardens, agricultural landscapes, villages, towns and history of two of France’s most beautiful regions: Normandy and the Loire Valley. Beginning with Claude Monet’s garden in Giverny, we finish with the grand gardens of Versailles in Paris. …
END_OF_DOCUMENT_TOKEN_TO_BE_REPLACED
View Calendar 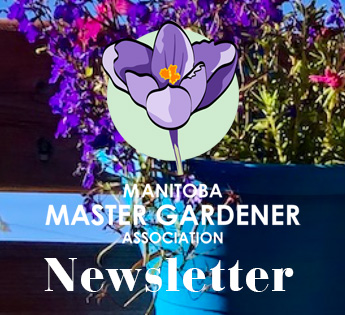