My Childhood Dream to Create an Indigenous Garden 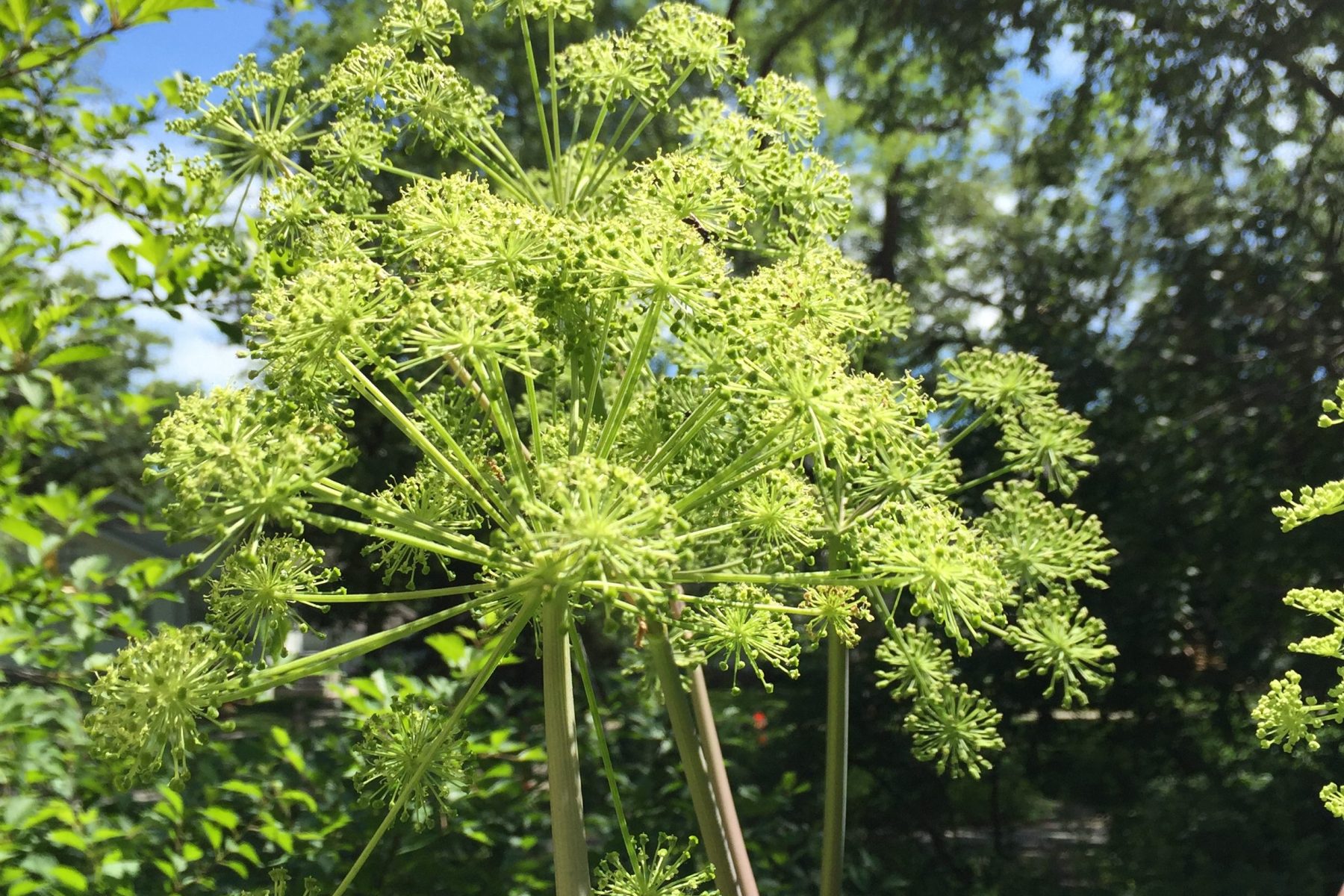 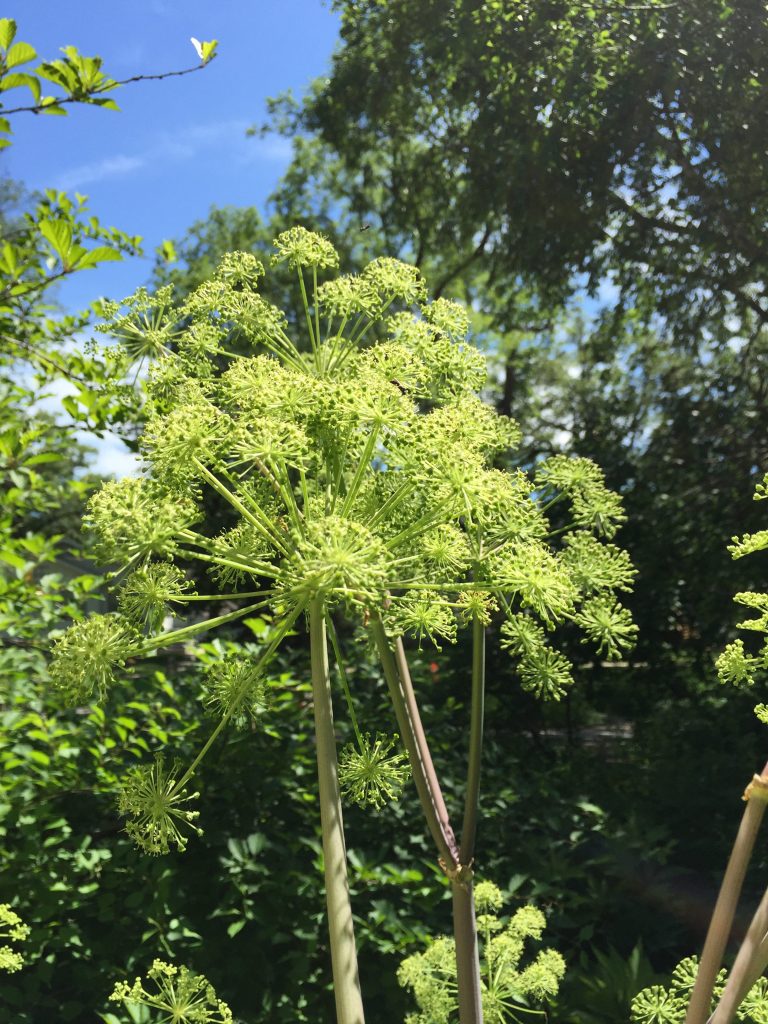 I have located plants throughout my yard to suit their habitat requirements. My woodland area in the back yard is shady and located near two large pine trees. This area has Canada violet (Viola canadensis), Bicknell’s geranium (Geranium bicknelli Britt.) and ferns. I located my rarest native plants in the area where I removed Aegopodium so many years ago. It is a moist area of dappled shade, the perfect location for my yellow lady’s-slipper (Cypripedium parviflorum), nodding trillium (Trillium cernuum L), bloodroot (Sanguinaria canadensis), and alumroot (Heuchera richardsonii). Brunnera or Siberian bugloss (Brunnera macrophylla, nn) and lungwort (Pulmonaria officinalis, nn) are located here as well. At one time I had Jack-in-the-pulpit (Arisaema triphyllum) growing in this area. I have not seen Jack for some time but keep hoping he will make an appearance again. I have had some plants take a hiatus and suddenly reappear again years later. 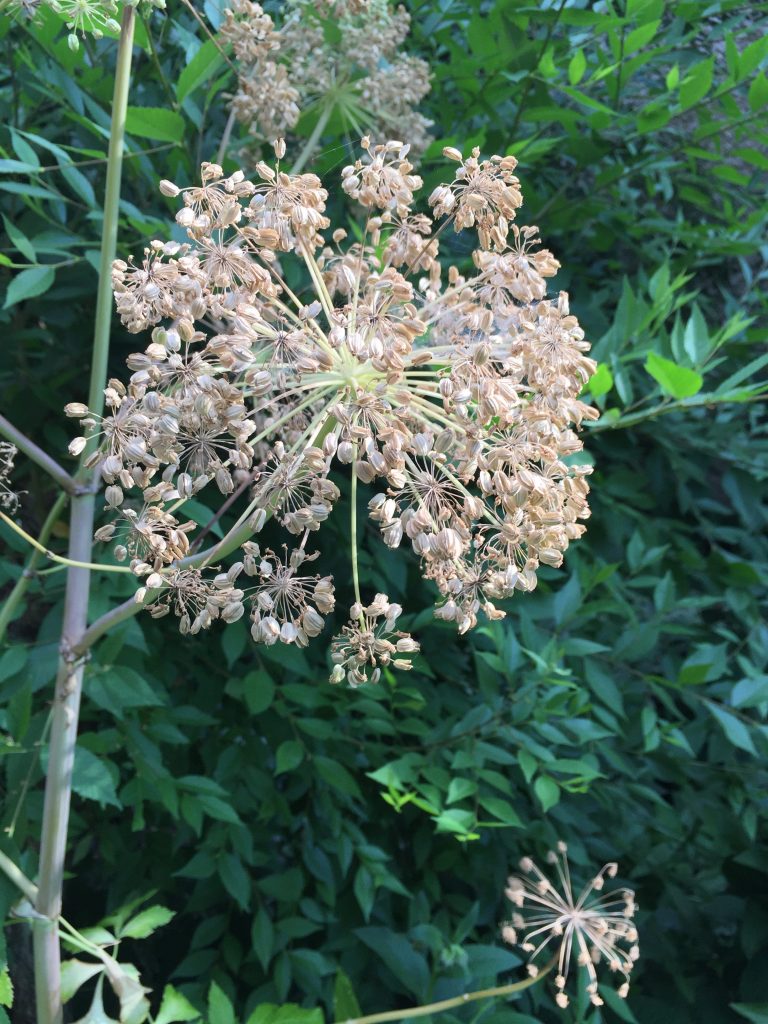 A distinct microclimate exists between my house and my neighbour’s house to the east, a distance of 20 feet. I am fortunate that my neighbours have allowed me to extend my garden into the area right up to the wall of their house. In the summer months this is a hot, dazzlingly bright area for much of the day, thanks in part to the sun reflecting off the neighbour’s stucco wall. I grow my tallest species, not all of them native, in this spot. Mulleins (Verbascum Thapsus, non native (nn)), great Angelica (Angelica atropurpurea), cow parsnip (Heracleum sphondylium, nn), tall meadow rue (Thalictrum pubescens), spotted Joe-Pye weed (Eutrochium maculatum), common milkweed (Asclepias syriaca) and heirloom scabious (Cephalaria gigantea, nn) are the predominant residents of this intriguing spot. The scabious regularly grows to 10’ tall by fall and the Angelica to 8’or 9’ tall. In the fall, this area teams with insect pollinators. By far these plants attract the most insects. There are literally hundreds of pollinators in this area daily. The microclimate area is a wonderful backdrop to my front yard garden. This front garden is a sunny area in which many favourites have been planted. Some of the notables include: fringed American aster (Symphyotrichum ciliolatum), gooseneck loosestrife (Lysimachia clethroides, nn), starry false Solomon’s seal (Maianthemum stellatum), pink turtlehead (Chelone obliqua, nn), fringed loosestrife (Lysimachia ciliata) and speedwell (Veronica spicata, nn). 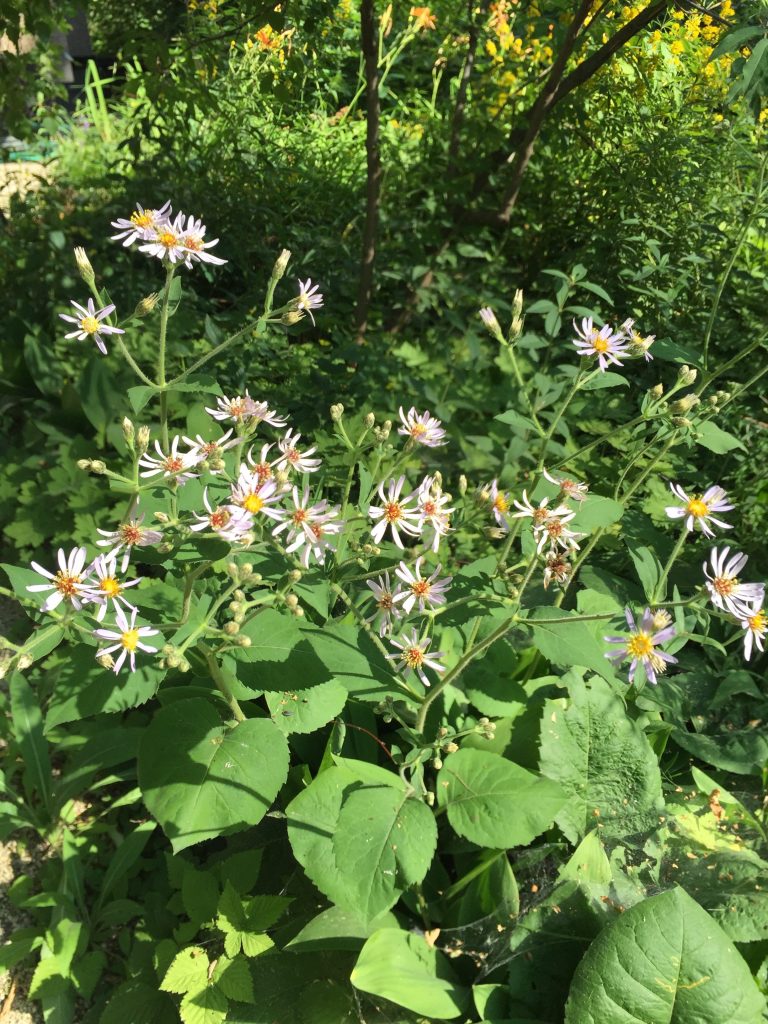 The plants in my garden have come from many sources. Very few have been purchased. Many of my plants have been donated by friends. A number of my plants have been saved from areas slated to be cleared for development. I have nodding trillium (Trillium cernuum) from a site that was going to be bulldozed. I took what I could in the short time I had. They are a wonderful asset to a shady area of the garden. I have small yellow lady’s-slippers from a farmer in Saskatchewan who reportedly had a field described to me as being yellow as far as the eye could see. I do not, on principal, take plants from the wild, but I have property at Lake of the Woods, and have taken a number of species from my own property to plant in my city gardens. Those taken from the lake are all ones that are easy to transplant and will reproduce readily. They include wild columbine (Aquilegia canadensis), common yarrow (Achillea millefolium L.), Canada anemone (Anemone canadensis), mulleins (Verbascum Thapsus, nn), evening-primrose (Oenothera biennis) and pearly everlasting (Anaphalis margaritacea). I do not take plants from my property at the lake that I know will not survive in the city. Those include: clintonia (Clintonia borealis) and large yellow lady’s-slipper (Cypripedium parviflorum var. pubescens). I admire these in their rightful location.

I am pretty good at avoiding problems of invasive or noxious species, although I was caught off guard a few years ago when I allowed a single volunteer valerian (Valeriana officinalis) to grow in my yard. It was a statuesque plant with beautiful flowers and an exquisite perfume. It was a lovely addition until it proved to be highly invasive and while I have tried numerous ways to eradicate it, I know I never will. My common milkweed (Asclepias syriaca) was acquired many years ago on my dog-walks through Churchill Park. Not too many years ago common milkweed was classified a noxious weed, and the park maintenance staff was instructed to remove it from the park. Each year in late spring they would pull out all the milkweed growing along the river bank, often leaving it on the ground to die. I would pick up what I could, carry it home and plant it. Today I have several well-established areas of milkweed in my yard, all from the plants discarded in Churchill Park and all of which have supported and produced many monarch butterflies. As a side note: milkweed is back flourishing in Churchill Park! 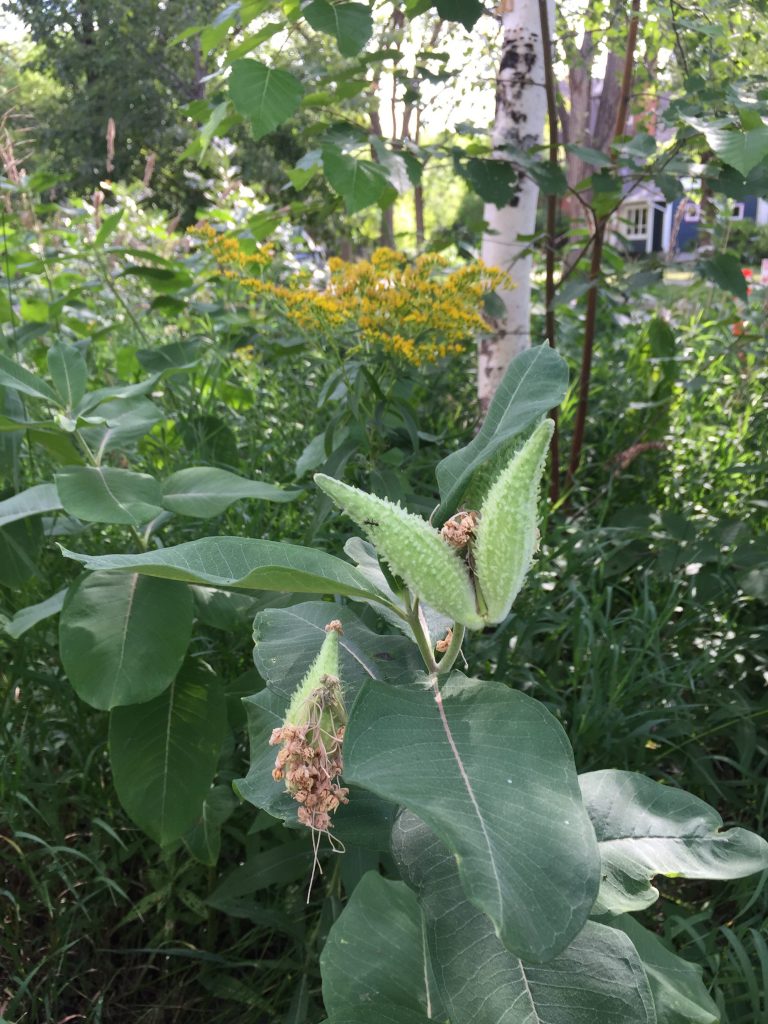 Original planting arrangements were not always successful, and I have had to move plants to accommodate their needs. Some plants positioned for their sunlight requirements had to be moved because adjacent plants competed with them. While I did my best to select suitable sites for each plant, for reasons such as over-crowding, lack of vigor or simply appearance, I have found that it has been necessary to move plants. For the most part they adapted to the locations they were given. I aimed to install plants and cuttings in spring or autumn when the soil was cool and moist and the temperature was moderate. This approach eliminated heat stress. I found transplanting was best done in the early morning on overcast days, or later in the evening when the plant could recover overnight without heat and sun to contend with. Blocking sunlight with pieces of black coroplast for a couple of days is a gentler approach to acclimation. Transplanting was usually most successful with the addition of mulch while plants were being established.

My plants are greatly enhanced by the fact that I am able to make a good supply of compost from the three-by-three-by-three-bin wood frame/steel mesh compost structure that my husband and I constructed about twenty-five years ago. At this point it has seen better days, but it functions perfectly in turning out a good supply of compost. It is the repository for kitchen scraps and yard waste. When I worked full-time, I would bring home the daily organic food remains collected from two floors of the office building in which I worked. This gave me an excellent supply of compost. On occasions I will beg-borrow-and-steal newly mowed grass clippings from neighbours who I know do not have commercial lawn services and do not use chemicals. The nitrogen in the greens is an amazing accelerator for compost. I store bags of fall and spring raked leaves which are mixed with kitchen scraps forming the browns that add carbon. I maintain the compost bins, turning them regularly, taking instructions as to quantities of water, browns and greens from my husband who is a certified Master Composter.

Living in an older, well established part of the city, means having to deal with a number of invasive plant species that were introduced decades ago and have spread through the city. Over the years, these invasives have developed a firm foothold in the older neighbourhood. Without doubt, the worst is the European import, creeping bellflower (Campanula rapunculoides L.). Not a single house in my neighbourhood is free of bellflower. Their rhizomes run so deep that digging down a foot deep might not be enough to reach its depth and some of the rhizomes are the size of carrots. When digging, any miniscule portion of root left behind after digging will regenerate. And, if that is not bad enough, each flower has the potential of producing up to 15,000 seeds. Almost as pervasive in older neighbourhoods is ground- ivy, also known as creeping Charlie (Glechoma hederacea). I have a few locations in the front yard and boulevard that are not fully developed as garden areas, and in these spots, ground- ivy (or its much more appealing name: run-away-robin) continually tries to establish itself. To counteract its advancement, I scatter white clover seeds. White clover (Trifolium repens) is a living mulch which out-competes the run-away-robin and is a perennial nitrogen producer. It thrives when cut and can withstand harsh living conditions, including clay soil in its worst state. Clover attracts insects, particularly bees, and other insects.

40 years ago when I started my indigenous garden, my intention was purely self-satisfaction. It had nothing to do with providing an environment for insects and wildlife. The notion that perhaps there were benefits to what I was doing formed during development of the site. I began reading articles about the loss of native habitat as the human- dominated landscape was becoming less able to support functioning ecosystems.

Native plants are the ecological basis on which life cycles depend. Growing native plants in home gardens and public landscapes creates habitats that are an intricate part of a collective effort to nurture and sustain the environment for life below and above ground. Urbanization has taken ecologically productive land and has transformed the landscape from what was intended. For example the expanse of highly manicured lawns has created a monoculture that is estimated to cover approximately forty million acres of land in the US. Such human-dominated landscape will not be able to support functioning ecosystems and what will remain will be isolated islands of natural habitats too small to support wildlife. It is critical to increase awareness of the importance of including native plants in our home gardens. Hopefully this will eventually create bridges between isolated natural habitats.

Indigenous plants beautify any space in which they are found, whether it is an open field or a confined garden space. For the most part, these indigenous plants look after themselves. The fact that they evolved to this ecology means they have lower maintenance requirements. Once established they require little to no watering, they propagate easily and thrive without weeding (with the possible exception of an invasive thug elbowing its way into the garden), and do not require pesticides or fertilizing. An indigenous garden only has to live by rules determined by the orchestrator. 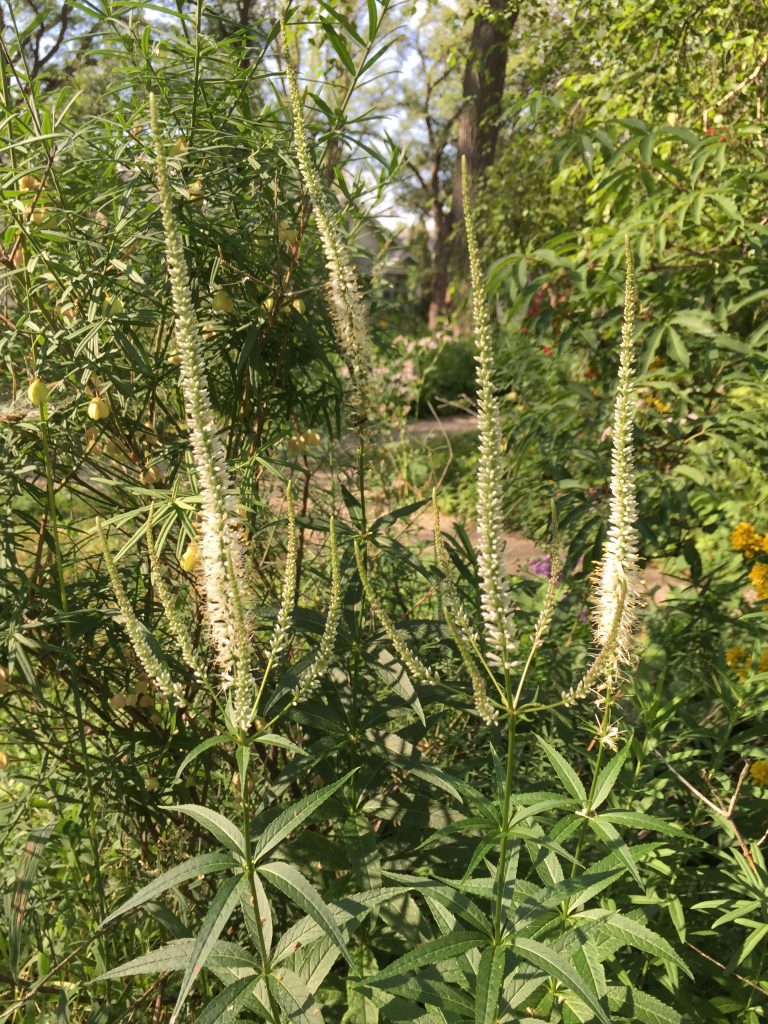 ← Gardening During the Pandemic
Volunteering During COVID-19 Times → 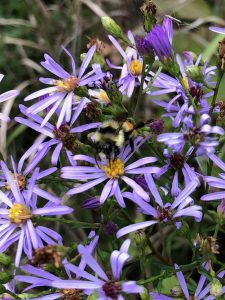 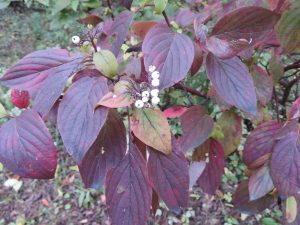 December Delights of the Tall Grass Prairie with Illinois resident, Cindy Crosby, who presents for Prairie Naturals Gardening Group and friends. A great way to end 2021 and begin dreaming about 2022. Make yourself a cup of tea, …
END_OF_DOCUMENT_TOKEN_TO_BE_REPLACED
View Calendar